Purpose: This script creates a new field in your database and will calculate the z-score for the selected field.

Per Wikipeadia a z-score "indicates by how many standard deviations an observation or datum is above or below the main".

When starting the script you will be given the following dialog. 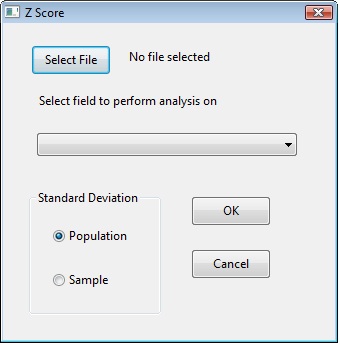 The script creates an additional field called Z_SCORE.  The closer the Z_SCORE is to 0 the closer it is to the mean (which can be found in the field statistics).  If the Z_SCORE is +/- 1 then that means that the observation is one standard deviation from the mean, if it is +/- 2 it would be two standard deviations and so on.  The larger the Z_SCORE the farther the observation is from the mean, this can be used to look for unusually large or small amounts.